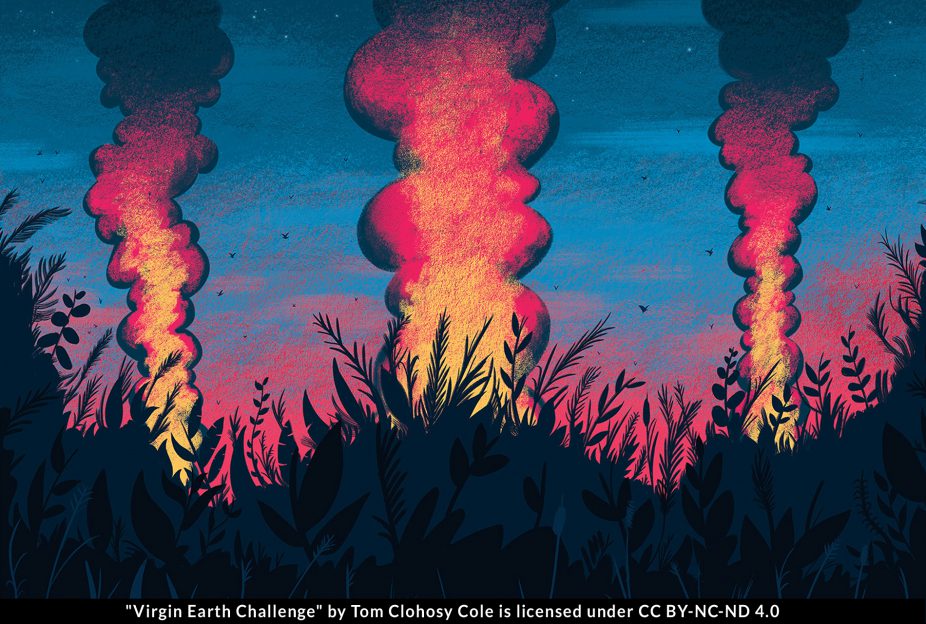 ‘Overshoot’ is when a species uses resources faster than can be replenished. We’re already there. And show no signs of changing.

Humans have a virtually unlimited capacity for self-delusion, even when self-preservation is at stake.

The scariest example is the simplistic, growth-oriented, market-based economic thinking that is all but running the world today. Prevailing neoliberal economic models make no useful reference to the dynamics of the ecosystems or social systems with which the economy interacts in the real world.

What truly intelligent species would attempt to fly spaceship Earth, with all its mind-boggling complexity, using the conceptual equivalent of a 1955 Volkswagen Beetle driver’s manual?

Consider economists’ (and therefore society’s) near-universal obsession with continuous economic growth on a finite planet. A recent ringing example is Kaushik Basu’s glowing prediction that “in 50 years, the world economy is likely (though not guaranteed) to be thriving, with global GDP growing by as much as 20 per cent per year, and income and consumption doubling every four years or so.”

Basu is the former chief economist of the World Bank, senior fellow at the Brookings Institution and professor of economics at Cornell University, so he is no flake in the economics department. But this does not prevent a display of alarming ignorance of both the power of exponential growth and the state of the ecosphere. Income and consumption doubling every four years? After just 20 years and five doublings, the economy would be larger by a factor of 32; in 50 years it will have multiplied more than 5000-fold! Basu must inhabit some infinite parallel universe.In fairness, he does recognize that if the number of cars, airplane journeys and the like double every four years with overall consumption, “we will quickly exceed the planet’s limits.” But here’s the thing — it’s 50 years before Basu’s prediction even takes hold and we’ve already shot past several important planetary boundaries.

In fairness, he does recognize that if the number of cars, airplane journeys and the like double every four years with overall consumption, “we will quickly exceed the planet’s limits.” But here’s the thing — it’s 50 years before Basu’s prediction even takes hold and we’ve already shot past several important planetary boundaries.

Little wonder. Propelled by neoliberal economic thinking and fossil fuels, techno-industrial society consumed more energy and resources during the most recent doubling (the past 35 years or so) than in all previous history. Humanity is now in dangerous ecological overshoot, using even renewable and replenishable resources faster than ecosystems can regenerate and filling waste sinks beyond capacity. (Even climate change is a waste management problem — carbon dioxide is the single greatest waste by weight in all industrial economies.)

Meanwhile, wild nature is in desperate retreat. One example: from less than one per cent at the dawn of agriculture, humans and their domestic animals had ballooned to comprise 97 per cent of the total weight of terrestrial mammals by the year 2000. That number is closer to 98.5 per cent today, with wild mammals barely clinging to the margins.

The “competitive displacement” of other species is an inevitable byproduct of continuous growth on a finite planet. The expansion of humans and their artefacts necessarily means the contraction of everything else. (Politicians’ protests notwithstanding, there is a fundamental contradiction between population/economic growth and protecting the “environment.”)

Ignoring overshoot is dangerously stupid — we are financing growth, in part, by irreversibly liquidating natural resources essential to our own long-term survival.

And things can only get worse. Even at today’s “lacklustre” three-per-cent global growth rate, incomes/consumption would double in just 20 years and produce — in this century — dramatic climate change, widespread extinctions, the collapse of major biophysical systems, global strife and diminished prospects for continued civilized existence.

But even this threat isn’t enough to move the world community to act sensibly to save itself. Like a mind-altering drug, the compound myth of perpetual growth and continuous technological progress obscures reality. Economists thicken the fog by insisting that the economy is “decoupling” from nature — another illusion resulting from faulty accounting, modelling abstractions and the fudging effects of globalization (for example, wealthy countries “offshoring” their ecological impacts onto poorer countries and the global commons).

The biophysical evidence — that is, reality — shows that material consumption and waste production are still increasing with population and GDP growth. Meanwhile, carbon dioxide is accumulating at accelerating record rates in the atmosphere and the years 2014, 2015 and 2016 sequentially shared the distinction of being the warmest years in the instrumental record.

There is little question that the immediate drivers of overshoot are overpopulation and excess consumption, so there is widespread support for the idea of “clean production and consumption.” What only a few realists are willing to state out loud is that this must soon translate into less production/consumption by fewer people.

But this raises another problem. Thirty per cent of the world’s population are still considered to be “very poor” (living on less than $3.10 per day, purchasing power adjusted) and deserve to consume more.

Meanwhile, ours is a world of chronic gross social inequity. Oxfam recently reported that the world’s richest eight billionaires possess the same wealth as the poorest 50 per cent of humanity — more than 3.5 billion people). The richest fifth of people take home about 70 per cent of global income compared to just two per cent by the poorest fifth.

Such inequality deepens the hole we are digging for ourselves. There may be enough of everything to go around, but greater incomes enable the citizens of high-income countries to consume, on average, several times their equitable share of global economic and ecological output. Meanwhile the poor scrounge for crumbs at the bottom of our Earthly barrel. Even within prosperous nations, a widening income gap is known to undermine population health and erode social cohesion, the contemporary United States being an outstanding example.

How might a clear-sighted neutral observer interpret our predicament? First, she or he would point out that on a finite planet already in overshoot, it is not biophysically possible to raise the material standards of the poor to those of the rich sustainably — that is, without destroying the ecosphere, undermining life-support functions and precipitating global societal collapse. In a non-deluded world, governments would no longer see economic growth as the panacea for all that ails them; in particular, they would acknowledge that enough is literally enough and cease promoting growth as the primary solution to both North-South inequity and chronic poverty within nations.

Instead, a rational world would focus on devising institutions and policies for co-operative redistribution — ways to share the benefits of development more equitably. The goal should be to enhance the material well-being of developing countries and the poor and improve life-quality for all while simultaneously reducing both aggregate material consumption and world population.

Ensuring a socially just, economically secure and ecologically stable global environment requires: a) that rich nations consume less to free up the ecological space needed for justifiable consumption increases in poorer countries; and b) that the world implement a universal population management plan designed to reduce the total human population to a level that that can be supported indefinitely at a more-than-satisfactory average material standard. This is what it means to “live sustainably within the means of nature.”

Fortunately, various studies suggest that planned de-growth toward a quasi steady state economy is technically possible, would benefit the poor and could be achieved while improving overall quality of life even in high-income countries.

Considering the human suffering that would be avoided and number of non-human species that would be preserved, this is also a morally compelling strategy.

The foregoing diagnosis is anathema to the prevailing growth ethic, the naive fallacy that well-being is a continuous linear function of income, and politically correct avoidance of the population question. Many will therefore object on grounds that the suggested policy prescription is politically unfeasible and can never be implemented.

They may well be correct. The problem is that what is politically feasible is likely to be ecologically irrelevant or downright dangerous. Accelerated hydrocarbon development, better pipeline regulations and improved navigational aids for tanker traffic on B.C.’s coast, for example, don’t cut it as sustainable development in a world that should be abandoning fossil fuels.

The data show clearly that we are at a crucial stage of a slow but accelerating crisis. To be effective and timely, sustainability policy should already be consistent with the real-world evidence. Nature can no longer endure the consequences of “alternative facts.”

In these circumstances, should not elected politicians everywhere have an obligation to explain how their policies reflect the fact of global overshoot?

Denying reality is not a viable option; self-delusion can become all-destroying. If our leaders reject the foregoing framing, they should be required to show how the policies they are pursuing can deliver ecological stability, economic security, social equity and improved population health to future generations. Ordinary citizens should assert their right-to-know as if their lives depend upon it.

It is worth pointing out that B.C.’s recent provincial election campaign and Canada’s 2015 campaign ran with no reference to the key issues outlined here or any explanation of the omission (and the 2016 U.S. presidential campaign was even more other-worldly).

Are you worried yet?

William E. Rees, PhD, FRSC is a member of Columbia Institute’s Board of Directors. He is also a bio-ecologist, ecological economist, and the former Director and Professor Emeritus of the University of British Columbia’s School of Community and Regional Planning.