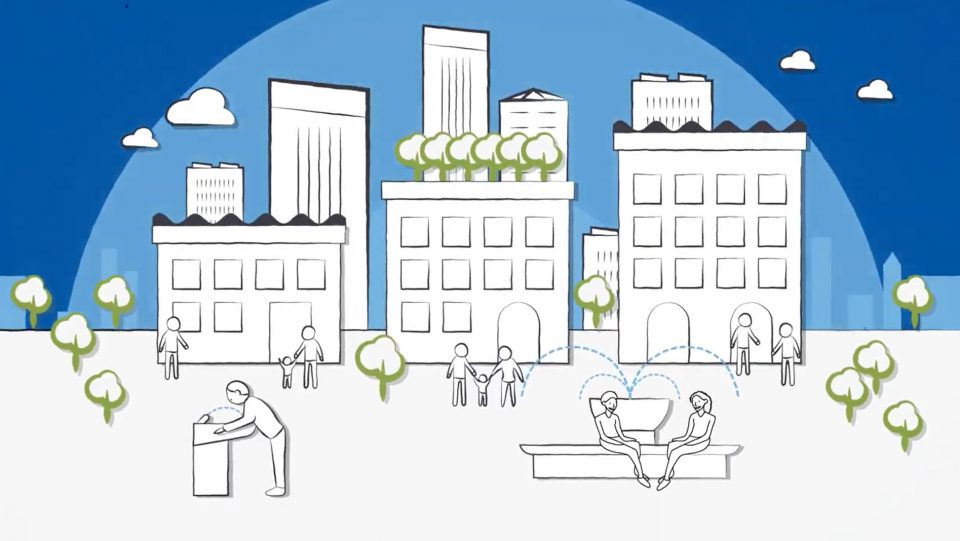 Written by Charley Beresford.
Read this article on the Tyee

On slashing emissions, many municipalities are already trailblazers. Bring ’em to the table!

In April, three Canadian premiers met with media to provide an update on interprovincial efforts to develop a national energy strategy. While their update on the Council of the Federation’s plans opened a needed window on the negotiations, missing from public discussions so far is any reference to the stakes — and potential roles — for municipalities in a Canadian energy strategy.

There are strong arguments for municipalities becoming a bigger part of this process. Rising public sector energy costs and community energy security questions — as well as local economic and environmental concerns related to energy use, production and transportation — mean that municipalities have important interests in the direction of energy policy in Canada.

Energy security is an area of growing concern for local governments and Canadian communities. Dependence on imported oil leaves public sector organizations, businesses and residents susceptible to fluctuating prices and concerns about supply security. And energy poverty — when households spend over 10 per cent of income on energy costs — is a direct problem for a growing number of Canadians.

Globally, many countries are already in the process of planned transitions to more sustainable, locally-based and ultimately more secure national energy systems. Municipalities are key players in many of these transitions.

Renewable and district energy projects by municipalities are an important component of Germany’s transition towards an 80 per cent renewable-based energy system by 2050. In Denmark, municipalities have played an important role in that country’s renewable energy and energy efficiency success through the nationwide development of district energy systems by local authorities and through municipal leadership in wind and renewable electricity generation.

Energy use is deeply intertwined with climate change. In April, the same month the three premiers were talking about the path toward a national energy strategy, the Mauna Loa Observatory in Hawaii reported that the concentration of carbon dioxide in the atmosphere has reached 400 parts per million. This is 50 parts per million above the safe upper limit for carbon dioxide concentration named by many scientists, including by former NASA scientist James Hansen.

In 2011 alone, extreme weather events cost Canadians $1.6 billion, and the bill is projected to get much worse in years to come. By 2020, the National Roundtable on the Environment and the Economy estimates the annual economic impact of climate change will be $5 billion, and by 2050 could be more than $40 billion. Many of these costs will be borne by local governments.

Local governments have direct or indirect control of 45 per cent of Canada’s greenhouse gas emissions, and in some provinces are already expected to meet GHG reduction targets. Through measures such as strengthened building codes, better land use planning, public transit development, capturing waste heat from landfill and sewage infrastructure, many Canadian municipalities have been trailblazers, reducing energy consumption and cutting GHG emissions.

At the same time, local governments have been constrained in these efforts by downloading and inadequate support from senior levels of government. Better tools and more resources to help municipalities reduce GHG emissions and conserve energy are crucial to any national climate change strategy.

But it’s not all doom and gloom; a national energy strategy opens the door to new economic opportunities for Canadian communities, as well as opportunities to address imbalances in the relationships between municipalities and other orders of government.

Municipalities stand to benefit from a policy framework that encourages clean energy development, green technologies and energy conservation. Canada has abundant renewable and hydrocarbon resources, and energy exports are an important part of our economy. However, the ways we produce and use energy are changing.

Alternative, renewable and low-carbon energy production is rapidly growing. This is a global transformation, and without concerted action, Canada risks being left behind. Jobs and economic activity in the clean energy sector are increasing, and a comprehensive national energy strategy could help municipalities capitalize on these new opportunities.

A 2012 report by the National Round Table on the Environment and the Economy assesses the current value of Canada’s green low-carbon goods and services market at about $8 billion, and notes it could grow to $60 billion by 2050 with supportive policies. Diversifying Canada’s economy into these sectors could help reduce our country’s vulnerability to the cyclical ups and downs of global commodities markets, and reduce the incidence of hardship in our communities.

The premiers present for the April 2013 announcement referenced ongoing work with provincial and territorial energy ministers to refine a plan for the Council of the Federation’s July 24, 2013 meeting with national public consultations to follow.

The plan to develop a national energy strategy is clearly a step in the right direction. An overarching vision to encourage cooperation toward common goals, such as climate change mitigation, energy security, environmental sustainability and a more diversified economy will benefit all Canadians. It will be a stronger vision if Canada’s municipal governments, which have such important stakes and key contributions to make, are part of the process.