Canada Infrastructure Bank and the Public’s Right to Know examines the proposed Bank, and government legislation that prevents public access to information. The report also highlights concerns expressed by information commissioners and includes examples of how the Canadian government can do better.

“The federal government is ready to invest $35 billion in public funding to create a new Infrastructure Bank intended to attract private investors for public projects,” observed Keith Reynolds. “At the same time, in June, government passed legislation that would further undermine the public’s access to information about the Bank.”

The report found that in recent years, a number of Canada’s Information Commissioners have been raising concerns about transparency – particularly when public services and infrastructure projects are delivered by private corporations.

As governments increasingly turn to public-private partnerships for the delivery of services, proprietary information, trade secrets, and competition are cited as rationales for secrecy with these private contractors.

Essentially, private sector interests are given a veto over releasing information about how public funds are spent. Freedom of Information requests to government are often denied, delayed or arbitrarily redacted. This erodes the transparency and accountability needed for the functioning of a healthy democracy.

“In B.C. we only need to go back a few weeks to find a perfect example of why greater government transparency is needed,” observed Charley Beresford, Executive Director of Columbia Institute. “It took almost a year for a media outlet to receive information about potential political interference in the construction of the Port Mann Bridge – interference that may have occurred four years earlier and that was made public only after an election.”

The report identifies three recommendations to government that would improve transparency into the private delivery of public services.

2. Canadian jurisdictions should adopt a policy of prompt and full proactive disclosure of all procurement records, including preliminary analyses, business case documents, successful and unsuccessful bids, evaluations of bids, and contracts.

3. Canadian jurisdictions should move to a discretionary standard for the release of information that has gone before cabinets or cabinet committees. Information commissioners should be given access to these documents and the ability to rule on whether such documents should be released.

The report notes: “The Canadian government says the CIB will contribute effectively to the everyday life of Canadians. Yet, without increased transparency, Canadians will never know if this is true.” 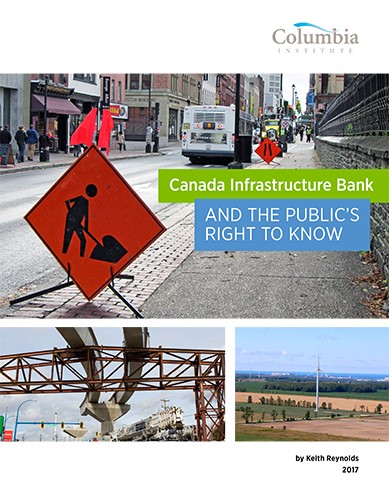