Back in House Report

The report, “Back in House: Why Local Governments are Bringing Services Home” says that across Canada and around the world public services that were once outsourced are now finding their way back in-house to municipalities, mainly because using in-house services saves money. That means the expected benefits from privatizing services are not as significant as expected.

“Back in House” debunks the myth that it’s cheaper to contract out public services in order to save money and produce a better product,” says Charley Beresford, Executive Director of the Columbia Institute.

“In several boroughs of Montreal we’ve noticed that we’ve been able to increase productivity, add flexibility to our projects and even improve on quality. Also, for every project we do in-house, and not in the private sector, we reduce chances of collusion and corruption amongst bidders,” says Craig Sauvé, City Councillor of Montreal.

Download the Back in House Workbook, a practical guide on how to bring those services back home. 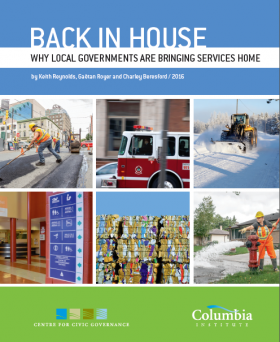