Mining in BC is booming. The 2011 BC Jobs Plan foreshadowed eight new mines and nine mining expansions in operation by 2015. By mid-2012, the provincial Environmental Assessment Office indicated 26 mine propos­als in process: three under review and 23 in the pre-application stage. With the Northwest Transmission Line making inexpensive energy available, BC can expect an even greater increase in mine project proposals in the future, particularly in the northwest.

Such a rapid expansion of mining activity puts local governments in a quandary. Mining operations offer significant opportunities for communities, bringing great potential for jobs, development, and growth. On the other hand, mining operations can affect communities in adverse ways, from compromising drinking water and air quality to reducing property values.

As it stands, mining legislation in BC does not allow local governments to be involved in decision-making on major resource projects, even though these projects may impact residents’ quality of life and may require budget­ary expenditures to mitigate.

So what will it take to build a thriving mining sector in BC that is in sync with the concerns of local communities? Decades of experience and front-line expertise suggest that modernizing BC’s “gold rush”-era mining laws is in order. 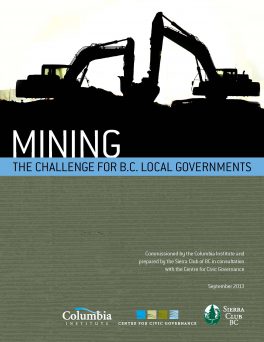